We now know enough about the brain to make a difference in coaching for the development of productive routines and mindsets.

At a very elementary level we know that intentional change can be brought about to lead one’s brain into working differently than it does today. It’s called neuroplasticity.  The brain does it by itself all the time, for as long as one is alive, by improving and changing the way it works for its own goals and benefit. The exciting possibility is that we can intentionally do the same thing—change the way we think and work for our own goals and benefit. There are beginning practices that allow brain function adjustment, to the brain owner’s benefit, in life and in a career.

Another of the brain’s operating systems, automaticity, can also be leveraged for the brain owner’s benefit. Mostly to be more efficient, the brain converts things we do repeatedly into embedded routines. Routine behaviors take less of the brain’s energy. Things such as walking, swimming, riding a bike, driving a car, getting dressed, eating, or meeting new people becomes routine, or automatic. Once these habits are formed, they are difficult to change because the brain resists change to routines.

Among the brain’s primary duties is to protect its owner from threat and danger and harm. This is objective #1. When not in danger, the brain’s objective #2 is to seek establishing and maintaining comfort (physical and psychological). The safer the environment, the more positive life can be.

A Metaphor: The Brain in Two Colors

From a 35,000-foot perspective, the brain has two functional operating systems, the thinking (Executive Function) brain and the feeling (the Limbic System) brain. Countless authors make the basic distinction of a dual process. In the academic literature it is referred to variously as: 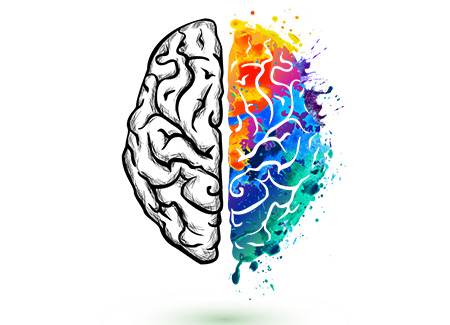 In this illustration the Red Text (left) part of the brain reacts and acts fast to protect the owner from harm. The Blue Text (right) brains thinks, analyzes, problem solves, reflects, runs scenarios, searches for the best reaction or action, or decides to not act.

Because of how the brain is designed and what it’s charged with doing, the Red brain has first access to resources. It’s faster than the Blue brain.

The Red brain has a negativity bias built in. It’s looking for bad things by design.  Jumping out of the way of a poisonous snake is not a reflective process; it’s now! Even if the snake turns out to be a branch among the weeds. The brain’s negativity bias is about four to one, so it’s a powerful first filter indeed.

The Red brain sees more danger than really exists. Therefore, it acts when no action is needed. It may act larger, louder and longer than required. It is defensive. It is hypersensitive to real, implied or imagined criticism, even self-criticism. It listens to your inner critic. It resists the new, unique, different, creative, risky, innovative and adventurous options to maintain safety inside its comfort zone.

The Blue brain is a supercomputer restricted from full use and application by an active Red brain. In most of us these two brains are systems in opposition to one another.

The Brain and Mindsets

Mindsets are our way of approaching things in the same, consistent way and these are supported by values, beliefs and subjective biases. Living between the Red and Blue brains, mindsets can be forces for good or for bad. Mindsets are basically good or bad biases that have become routine and that guide many information handling behaviors. There is, for example, confirmation bias. Once someone has made up their mind on an issue (e.g., vaccinations), the mindset brain filters incoming information and accepts and registers supporting information while rejecting information counter to our existing belief or bias. The Red brain directs our attention to supporting information and channels and will not watch counter channels.

Self-awareness is strongly related to life and career success. The more you know about yourself and how you are experienced by others, the more opportunity you have to be effective.

For most, the self-view is constructed in the rational and conscious Blue brain and defended by the emotional and unconscious Red brain. Since the Red brain overvalues the positive confirmations of one’s created self, self-awareness is suspect.

When others observe you, they are watching the net Red/Blue in which you operate. Since the Red brain has a 4 to 1 negativity ratio, observers see more negatives than you do. An example would be negative non-verbals coming from the embedded routines or negative mindsets of the Red brain. We all know that a meaningful portion of communication is non-verbal. These are manifest in facial expressions, posture, eye contact, gestures, pace, projection and more. Taken together, those collective non-verbals can signal rejection, dismissal, anger, disappointment, frustration, defensiveness, obsession, or other messages which may or may not align with the words being used. All of this may be unintentional yet change the meaning of messages for recipients. When one is unaware their EQ skills are likely to display as ineffective.

You Are What You Show Others

Some people are referred to as “easy to read”. For example, some poker players suffer from offering “tells” to more skilled players. Nonverbals are a window to the soul, and to the Red brain. Its the part of you that others can see, perhaps more you than you do.

Before video-based calls and meetings became mainstream it was hard to convince someone being coached that their nonverbals were causing problems for them and others. Being able to illustrate that point today has become much easier. Record some meetings and use the playbacks to offer proof. We coached an executive who regularly folded his arms (a closed mindset) when anyone offered a contrary idea or noted a need for a change. He claims he does not take such a posture. We played back meeting footage and the evidence was clear. He later changed his ways, meaning his Blue brain had to override his Red brain.

Surveys of coaches usually show that many presenting issues are related to weak EQ skills. More specifically, listening skills and conflict management skills. Further, poor delegation skills often stem from a mindset that says, “I can do it better myself.” The interpersonal dysfunctions are typically coming from the automaticity program and ineffective mindsets, most of which people do not see in themselves. Implicit bias is another Red brain villain. Because these biases are unconscious to us, most claim these are not true of them.

So, brain coaching, at its present stage of infancy, is a matter of two important interventions:

Another way to think about it is to adjust the ratio of Red to Blue actions and reactions. For most of us the Red brain is stronger. To brain-smart executives, the Blue brain is more dominant and is more successful in life and work. The Red brain still has some essential work to do but it can be taught to stop doing things that negatively impact its owner.

During your 30-min consultation with a specialist at TalentTelligent, you can expect to:

If what we offer is compelling, we’ll partner to support you going forward. Schedule a 30-minute call—let’s see where it leads.