My grandfather was a general contractor and a carpenter. He built houses the old- fashioned way, with no electric anything and no nail guns. When I was 10, it was my summer job to help him build a house. I was handy because I’m ambidextrous (I could pound and saw with either hand). He was solely right-handed.

Of course, I made a lot of mistakes. After all, I was 10 and building a house. He would tell me to measure something and cut a board for him. When it wouldn’t fit, I had to do it again. He said, “measure twice and cut once”. All cuts after that were accurate. I asked him where he learned all of the techniques and tricks he used. He said “you learn by trying, correcting and doing”. Experience is the best teacher. Seventy years later, I still measure twice and cut once. It is a lesson of experience.

I’m Robert Eichinger, and I’m the co-creator, along with the research staff of the Center for Creative Leadership (CCL), of the 70 20 10 meme [the dictionary defines a meme as an “idea, behavior, or style that spreads from person to person”].  For a detailed look at this meme see The Leadership Machine, Michael M. Lombardo and Robert W. Eichinger, Lominger International, Inc., Third Edition 2007, Chapter 21, Assignmentology: The Art of Assignment Management, pages 314-361.

It was the late 1980s and Michael Lombardo and I were teaching a course at CCL called Tools for Developing Effective Executives. The course was basically a summary of the findings of The Lessons of Experience study done over a 13-year period at the Center, and published in 1988. My job was to convert the study’s findings into practical learnings and applications. Mike represented the CCL research staff and I was a practitioner at PepsiCo, and then at Pillsbury, during this effort. 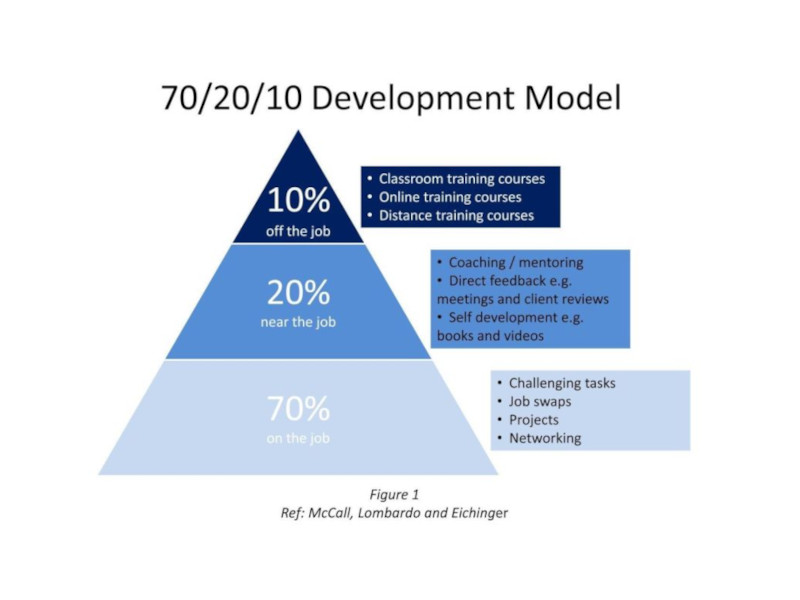 There is Substantial Research Behind 70 20 10

We were working on a section of the course on planning for the development of future leaders. One of the study’s objectives was to find out where today’s leaders learned the skills and competencies at which they were proficient. All had heard that experience is the best teacher, yet this study was the first to document what that meant.

During the study, 191 currently successful executives from multiple organizations were interviewed at length. Researchers asked these executives where they learned the things that led to their success – The Lessons of Success. The interviewers collected 616 key learning events which the research staff coded into 16 categories.

The 16 categories were too complex to use in the course so we, to be practical, re-coded the 16 categories into just five, to make them easier to communicate. This is same way the nearly 200 known brain biases are categorized into five, general categories to anchor unconscious bias training—because we can easily recall five, but not many more than five.

Since we were facilitating a course about how to develop effective executives, we could not use the adverse situations (one can’t plan for these to occur) and personal experiences outside of work (we couldn’t facilitate these). That noted, it is important to understand that these two categories made up a full 25% of the original 616 learning events. The three remaining categories left us with 75% of the 616 Lessons of Success.

So the final, easy-to-communicate meme for learning was 70 20 10. It applies to the 75% of learning that can be identified and controlled.  It is still widely quoted and used for development planning today, after more than 35 years:

One critique of this simple formula, aside from the frequent one that “it is not from any research”, is that 70 20 10 (three round numbers) seems too convenient. Well, in truth, we rounded from 69-22-9 when we were convinced that 70 20 10 was more readily memorable, would “stick” and would likely be adopted as a guide.

The basic findings of the Lessons of Success study have been duplicated at least nine times that we know of. These include samples in China, India and Singapore, and for female leaders, since the original samples of executives in the early 80s were mostly male. No study resulted in a perfect 70 20 10 finding, yet the results were considered very consistent with the original findings. A number of companies such as 3M have replicated the study internally and found roughly the same results.

In a massive replication of the initial study, CCL compiled 6,000 lessons from managers across demographic categories, economic sectors, and enterprise levels. The analysis indicated the same results, with some slight variation in percentages for women. My TalentTelligent Co-founder, Roger Pearman, assisted in this research.

I must add that, in various studies and in practical application there is a lot of variance between organizations and levels and types of people. These studies were mostly about how to develop people for senior leadership positions in large global companies. The meme for other levels of leadership and different kinds of companies might be different. There might also be unique memes for different functional areas.

The research was clear that learning is 75% work-related and 25% personal hardships. We calculated the 70 20 10 based on the 75%. So, although any perfectionist would protest, we now say that the Lessons of Success are best represented as 70-20-10-25.

The best learning occurs when all four sources are experienced for each leadership skill.

The 70% is full-time work and part-time assignments like task forces and study groups. The 20% is learning from others, mostly bosses. The study also found that learning from bad bosses is “stickier”. It’s learning what not to do, which is more memorable.

If the study were to be repeated today, we speculate that the 10% figure (coursework) might be larger because of eLearning, AI, VR and Zoom. If the sample included a larger representation of females, learning from others would increase and learning from jobs would decrease. At this moment in time, it is believed that females are not being give as many tough assignments as their male counterparts.

Experience remains the dominant source of the Lessons of Leadership. You learn from doing small versions of what later become large and significant responsibilities.

So, measure twice and cut once.

During your 30-min consultation with a specialist at TalentTelligent, you can expect to:

If what we offer is compelling, we’ll partner to support you going forward. Schedule a 30-minute call—let’s see where it leads.